“I was the general contractor for them and they lasted a few years and we had the property and needed to decide something to do with it,” said developer Del Lee.

Lee decided to build his own amusement park, he said to fill a need for entertainment geared toward kids 10 and up.

“I think we needed a park that is identifiably local, and we are trying to theme heavily to do that,” said Lee.

The local theme is seen by the use of all local crews and even local artists like Steve Bulter who painted the blue hole bumper car room. The bumper cars, along with electric go carts, vertigo swing, wipe out and swamp ape will all be the first attractions to open this summer.

“You’ll put your money on your card and there will be a card swipe at each attraction,” explained Lee.

Next summer, the goal is to open mini golf, and within the next ten years Lee is looking to further expand and open an indoor entertainment building.

Mayor Mike Thomas said the park is the finishing touch on the city’s efforts to change their image to a family friendly destination.

“We don’t want to add the same thing over and over again. This is a unique park they’ve put together and they’ve spent a lot of money in there making sure it’s in great shape and looks good. I think people are going to be surprised when they go in there, and they flip the lights on,” said Thomas.

Lee said the park will create about 50 new jobs. An official opening date has yet to be released. 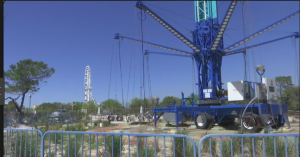