Why Panama City Beach should be your next vacation spot!

Check out this article from Birmingham, AL Magazine  by Tara Massouleh 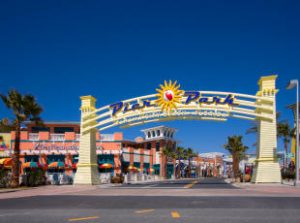 Why Panama City Beach should be your next vacation spot

On the secluded shores of Shell Island, the calm emerald waters of St. Andrew Bay sparkle under the bright morning sun. The water is clear as crystal–a purple sea urchin is visible three feet below the surface. A quick survey around the area reveals a pair of starfish nearby. Under the sand, live sand dollars make their home.

The quiet lapping of the water against wooden pier legs is punctuated with the occasional distant shriek from children playing a couple hundred yards away. At least three families have met up on Shell Island for a few hours of peaceful fun in the sun. Their smattering of sunscreen bottles, Capri Suns, cold beers, towels, and beach umbrellas provide everything necessary for the perfect beach day. On the island, there are no restrooms, shady pavilions, concession stands, or trashcans–and that’s all by design. The pristine and undeveloped seven-mile barrier island is nestled between St. Andrews Bay and the Gulf of Mexico, meaning you get the best of both worlds–calm bay waters and salty ocean surf–just by crossing the half-mile width of the island.

So where is this mysterious, uninhabited fantasy island? No, it’s not in the Caribbean. Or on the Hawaiian Islands. Shell Island is part of Panama City Beach, just a short pontoon-boat ride from the mainland.

PCB itself is only 4.5 hours from Birmingham. Years ago, the gorgeous beaches of Panama City were known as spring break central to college students across the nation; but today, Panama City Beach is singing a much different tune and going back to its roots as a family-friendly vacation destination with activities and amenities to suit all ages and interests. As part of their efforts to keep the beach both safe and fun, the city announced a law in April of 2015 banning alcohol on the beach for the duration of spring break. Since then, the city has stood behind their decision, and today, no alcohol is allowed on the beach during the month of March (when most colleges have spring break).

The city’s new motto, “Real.FUN.Beach,” simplifies what Panama City Beach offers to its visitors of all ages.

With 27 miles of beaches on the Gulf of Mexico, Panama City Beach is characterized by three main components: sun (an average of 320 days of sun each year), sugar-white sand, and crystal-clear water. And with a year-round average temperature of 74 degrees, Panama City Beach gives new meaning to the phrase “sunny and 75.”

The beachfront town was incorporated in 1977. In the early 2000s, the area experienced a major real estate boom, which replaced older homes and motels with high-rise condos and larger homes. In November of 2006, CNN Money named Panama City Beach the No. 1 real estate market in America, a title it held for the next five years. However, even with the boom in real estate, Panama City Beach still has areas that aren’t dominated by high rises. If you prefer a more private beach escape, PCB offers many single-family homes and smaller condo units in addition to larger complexes that offer convenient amenities like large pools, gyms, and complimentary chair and umbrella rentals. And with 100 public beach access points, there are plenty of options for those who prefer to camp, RV, or just come down for the day.

For adventure lovers, activities like parasling, jetskiing, paddle boarding, and banana boat riding are offered right on the shore in many places on the beach, meaning the entire family can hit the beach together, while the thrill-seekers of the bunch get their fix of water sports.

Two state parks, St. Andrews and Camp Helen, bookend PCB and have proven to be some of the most diverse and stunning areas in the entire city. St. Andrews is a popular spot to join a diving excursion in the area Skin Diver Magazine calls the “Wreck Diving Capital of the South.” In addition to incredible wreck sites, Panama City Beach offers an abundance of wildlife, including sea turtles, goliath grouper, and one of the highest concentrations of bottlenose dolphins in the world. Two fishing piers, a jetty, and a boat ramp make St. Andrews a popular fishing destination, as well. On the other end of PCB, Camp Helen State Park is a true ecological wonder that’s bordered by water on three sides. An excellent trail system takes visitors through five distinct ecosystems: mesic flatwoods, scrub oak, basin swamp, depression marsh, and marine unconsolidated substrate.

With so much to do in Panama City Beach, it’s easy to work up quite the appetite. Luckily, the city offers an array of dining options that range from funky dive bars and quirky breakfast spots to fine dining.

For breakfast, it’ll serve you well to follow the crowds to Thomas Donut & Snack Shop, established in 1971. Join the long line outside the humble shop and wait your turn to choose from a selection of upwards of 30 different donut varieties. The cinnamon sugar buttermilk cake and red velvet go quick, so if you want your pick of the plot, go early. The shop opens at 6 a.m. Other notable items: homemade kolaches, as well as burgers and sandwiches for lunch and dinner.

For another trusted breakfast spot, try Andy’s Flour Power, voted the Best Cafe and Bakery on Panama City Beach. The cheery breakfast/brunch/lunch spot serves up morning classics like omelets, biscuits and gravy, and a massive breakfast burrito. But one item not to miss is the Flour Power French Toast made with thick, country French bread dipped in cinnamon and brown sugar batter. The result is a light and airy toast that is sweet without being overly sugary. If you have the chance to meet owner John Certo (also known as Andy), you’re in for a real treat. The third-generation New York-raised chef is a fast-talker who will have you laughing from the minute you say hello.

For lunch, try out beachfront hotspot Schooners–just don’t be alarmed when beachgoers saddle up to a table with bare sandy feet and are still dripping from a dip in the Gulf. Also known as the “Last Local Beach Club,” Schooners is open from 11 a.m. until the wee hours of the night, with live bands playing often. For lunch or an afternoon snack, their Smoked Tuna Dip and a frozen Pina Colada should do the trick. For a similar laidback lunch experience, a $6 pitcher and the oyster sampler at Dusty’s Oyster Bar also is a good call.

For fine dining, ask any local and they’ll tell you Firefly is the place to go. Don’t let the restaurant’s unassuming location (in a strip mall next to a bowling alley) fool you. The food and service could stand up to any. The restaurant specializes in seafood, steak, and sushi, but be sure to get a bowl of the deliciously-rich She Crab Soup to start.

One of the most exciting things about Panama City Beach that even with its long history as a popular tourist destination, each year it continues to evolve, grow, and offer even more for its visitors. One way the city has done this recently is with specialty festivals giving visitors even more options for things to do off the beach.

UNwineD recently celebrated its second year as Panama City Beach’s premier food and wine event. Each year, eventgoers are treated to a Grand Tasting featuring rows upon rows of booths with craft beer, wine, and spirits from around the world, as well as booths featuring culinary creations from some of Northwest Florida’s best chefs.

Feeney says the festival started as a way to promote the changing dynamics of Panama City Beach’s spring visitor market, but it quickly has become one of the city’s most popular events, selling out the Grand Tasting both years.

“Inviting young professionals, and even later winter residents, to an elegant food and wine festival was the perfect way to diversify our event schedule, as well as provide an event that our visitors may not be able to experience in another destination,” Feeney says. “The weather and setting in the springtime set for a perfect backdrop to this event, and our partnership with Southern Living truly elevated the exposure of the destination.”

During this year’s festival, held March 23-24, the Southern Living-hosted Biscuit & Jam Kickoff Party provided a classy start to the weekend with craft cocktails, elevated Southern coastal hors d’oeuvres from Firefly, and beautiful lounging spaces in true garden party form. The weekend closed out with a concert at Aaron Bessant Park featuring none other than Birmingham boys, St. Paul & the Broken Bones.

More musical talent came to Panama City Beach at the end of April with the first annual Sand Jam music festival. Similar to Gulf Shores’ Hangout festival, Sand Jam features three days of musical acts right on the sugar white sand beaches. This year’s headliners included Incubus, Sublime, and Fitz and the Tantrums. The new festival is just one of Panama City Beach’s latest additions and the tip of the iceberg of reasons to move PCB to the top of your beach bucket list. For first timers and loyal visitors alike, there’s always something new to explore in Panama City Beach–you just have to know where to go.